From a young age Julie had collected soap. She would grate up her mother’s soap and mix it into balls, as well as create rose water by boiling up rose petals. However, she had always wondered how people made soap from scratch. In late 1997, Julie was browsing the stalls at the Yarra Glen Market in Victoria when she stumbled across the book How to make your own aromatherapy soaps. Opening her purse she found that she had the exact amount for the book, $7. That day in 1997, she found her passion.

Later in 1998 Julie turned her pastry cooking skills toward soap making and the first batch was made (coconut oil soap with the addition of lavender flowers). By late 2002 Julie had her first market stall at St Andrews Market with two card tables. This became routine, waking up early every Saturday morning with three small children in tow.

After becoming a regular, Julie called her business Soapbox Hill. She expanded her markets and stocked a few shops in the process. Over time, the original name changed to Urthly Organics, Julie moved from Box Hill South to Central Victoria, products came and went, and a strong fanbase was formed; all while still she was working out of her home.

In 2018, Urthly Organics was up for a rebrand and an opportunity to take its 20 plus years of hard work to the whole nation. Julie’s 79-year-old mother happened to take up painting at a similar time, which created a new family partnership. Julie’s mum would create a work of art that was then turned into the product packaging. The rebrand created a new era for Urthly Organics. The team expanded, monthly donations to local organisations began, and Urthly Organics moved out of the home to East Bendigo.

Since 1997, although Urthly Organics has come a long way, but some things have stayed the same such as, sourcing local, fair trade, ethically sourced ingredients, natural colourants, and essential oils. It still brings great joy to Julie when someone orders a product she has made, and this inspires her and her team to continue evolving to improve their products for their customers and environmental sustainability. 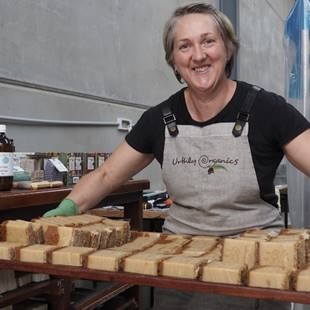